India to hold first Global Buddhist Conference in November; ICCR to give awards for Buddhist studies 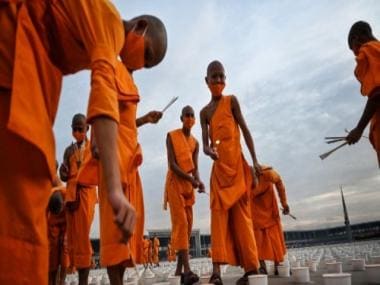 The Indian Council of Cultural Relations (ICCR) announced on Tuesday the first edition of the ‘Global Buddhist Conference’ and an institution of the first award in Buddhist Studies in November.

The conference’s theme, ‘Buddhism in Literature’, is an effort to take forward Prime Minister Narendra Modi’s vision on India’s significance in giving the world Buddhism.

President of the Indian Council for Cultural Relations (ICCR) Dr Vinay Sahasrabudhem announced the GBC as a bid to “cement ties with those who are into Buddhism”.

Through ICCR’s conferences, programs — which is an autonomous body under the Ministry of External Affairs — India will connect with international academia.

What you need to know

GBC will be organised under the overall framework of the flagship event of the Ministry of Tourism. Eminent scholars from prominent Buddhist universities/institutions in India and abroad will participate in the GBC.

In the run-up to the GBC, four regional conferences in India: Telangana, Sarnath, Gangtok and Dharamshala and abroad: Japan, South Korea, Thailand and Cambodia) will be organised.

To honour the contribution of foreign scholars/individuals/organisations for the promotion of Buddhist studies internationally, ICCR instituted the “Award for Promotion of Buddhist Studies”, which shall comprise a cash reward of $20,000, a plaque and a gold plated medallion. If there is more than one awardee, the amount would be shared equally.

“We also have instituted an international award for an eminent scholar who works in the discipline of Buddhist studies and probably the first award will be presented in the first conference,” Sahasrabudhe explained.

“We expect about 150-200 scholars coming together”, Sahasrabuddhe told ETV Bharat.

Talking about the significance, the ICCR president said, “We are building new bridges with the entire community of academicians who is into Buddhism studies through this conference and award as well. We are providing a platform to deliberate upon new streams of Buddhist studies like this year – Buddhism in literature. Every year we will have one theme and will be deliberate on that, it will further cement our ties with those who are into Buddhism.”

Downplaying the diplomacy angle, the Rajya Sabha MP stressed that one should not be looking into from that angle as the ICCR mandate is to evolve the cultural relationships.

With inputs from ANI