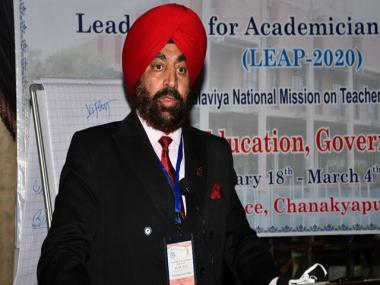 Lieutenant General Gurmit Singh (Retired) was sworn in on Wednesday as the new governor of Uttarakhand.

The oath of office was administered to Singh by the Chief Justice of the Uttarakhand High Court Justice RS Chauhan at Raj Bhawan pic.twitter.com/rlA9JlpRok

The oath of office was administered to Lt Gen Singh by the Chief Justice of the Uttarakhand High Court Justice RS Chauhan at a simple function held at the Raj Bhawan in Dehradun.

The function was attended by Chief Minister Pushkar Singh Dhami, his cabinet colleagues and a number of senior government officials including Chief Secretary SS Sandhu and DGP Ashok Kumar.

Singh, who retired as the deputy chief of the Indian Army in February 2016, is a highly decorated former army officer. He held several prestigious posts during his nearly four decades of service, including adjutant general, and corps commander of the strategic XV Corps in Srinagar that overlooks the Line of Control (LoC) in Kashmir. Lt Gen Singh also handled the operational and military-strategic issues regarding China as the additional director-general of military operations, a responsibility for which he even had to visit China seven times and attend important military-diplomatic meetings related to border operations and LAC strategy.

With input from agencies