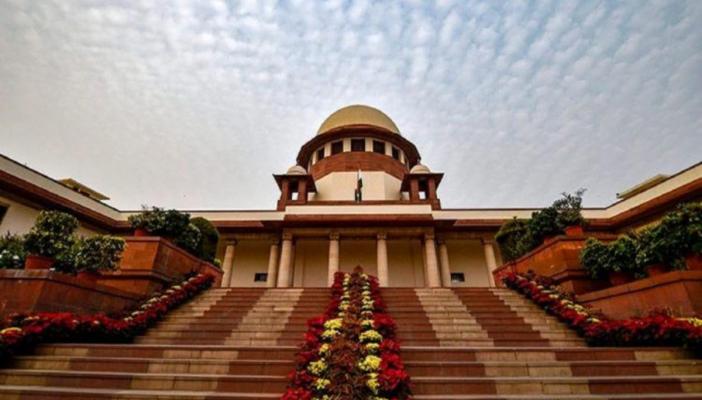 The Supreme Court on Thursday said farmers have the right to protest and was not against this even when a legal challenge against the three farm laws is pending but they cannot block roads “indefinitely”, an observation that came amid a blame game between the Union government and the farmer unions.While the farmers’ unions alleged that the police were responsible for the blockade at the Delhi borders as it suits them to allow a feeling in the minds of the citizens that farmers are blocking the road, the Union government claimed there was an oblique purpose behind the protests.During the hearing, a bench headed by Justice S K Kaul said it was not against the right to protest even when a legal challenge is pending but ultimately some solution has to be found.”Farmers have the right to protest but they cannot keep roads blocked indefinitely.You may have a right to agitate in any manner but roads should not be blocked like this.People have the right to go on roads but it cannot be blocked,” the bench also comprising Justice MM Sundresh said.The top court asked the farmer unions to respond within three weeks on the issue and posted the matter for further hearing on December 7.The bench noted that only four respondents have appeared before it in pursuance of its earlier direction.The apex court said the issue is limited here, “So far as the road is concerned, can the road be blocked?”We are only concerned with the issue that the roads are not blocked.Law is laid down (Shaheen Bagh protests case).You have a right to agitate but you cannot block roads.

People also have right on the roads.” Outside the court, the Bhartiya Kisan Union (BKU), whose supporters and office-bearers led by Rakesh Tikait are camping at Ghazipur on the Delhi-Uttar Pradesh border since November 2020, said the barriers at the protest site have been put by the Delhi police and not farmers.Tikait, the national spokesperson of the BKU, said protesters at Ghazipur have cleared the path on a service lane leading to the national capital but Delhi Police’s barricades were still present thereThe protesters have removed their tents but barricades have been put by the government and the Delhi police which are still there.The road is otherwise open.If you see, there are only barricading which have been put by the police, Tikait told reporters.BKU media in-charge Dharmendra Malik told PTI that the protest will continue .Key roads connecting Delhi to Haryana and Uttar Pradesh remained impacted ever since the protests began in November last year amid the continued stalemate between the Union government and the protesting farmers over the three farm laws.Senior advocate Dushyant Dave, representing farmers’ associations, told the top court that the right to protest is a fundamental right.He said a large number of identical matters are pending before another bench of the apex court and this case should also be tagged along and be heard by the same bench.The senior advocate further alleged that roads were being blocked by the police and not farmers and said he has travelled six times on those roads.Dave said the simple solution to remove the blockade is that the police should allow farmers at Ramlila Maidan and Jantar Mantar.”Roads are blocked by the police.After stopping us, the BJP had a rally at Ramlila Maidan (over the attack on Hindus in Bangladesh) where more than five lakh people came.Why should they be selective? Why don’t the lordship take cognisance of that? This is the double standard” Dave said.The solution is allow us to agitate at Jantar Mantar…he added.Solicitor General Tushar Mehta, however, claimed that there was an oblique purpose behind the protests and “sometimes it is felt the farmers’ protest is not for the cause but for something else.” Last time they came (on Republic Day), it became a serious issue…something much more than a serious issue, the Solicitor General submitted.Responding to his submission, Dave, however, said an independent investigation will show that the serious issue was engineered and the people have been given bail who allegedly insulted this country by climbing on Red Fort.  On Mehta’s submission that there was an oblique purpose behind the protests, Dave said he can’t put allegations on the bonafides of farmers.”We all know that passing of the farm laws was for an oblique purpose.

It is to help corporate houses,” he saidThe bench asked Dave, “Is it your contention that roads can be occupied, or is it your contention that roads have been blocked by police.”Dave responded to say that the roads have been blocked due to improper arrangements by the Delhi police.”It suits them to allow a feeling that farmers are blocking the road.Let us come to Ramlila Maidan,” Dave said.Mehta said that for some people Ramlila Maidan should be the residence as they survive on Ramlila Maidan and Jantar Mantar.Addressing the bench, Dave said judicial discipline demands that this matter be transferred to a three-judge bench.Reacting strongly to Dave’s submission, the Solicitor General said, “We will not succumb to this browbeating.” The apex court noted Dave’s submission that he does not want this bench to hear the matter and the case be sent to another bench for hearing.The apex court had earlier wondered how can highways be blocked perpetually, while referring to road blockades by farmers protesting at Delhi borders against the three farm laws passed last year, and said it is the executive’s duty to implement the law laid down by the court.The top court had allowed the Union government to file a formal application to make farmer unions party to the plea seeking opening of road blockade at the Delhi-Uttar Pradesh border at UP Gate.The court was hearing a plea of a Noida resident Monicca Agrawaal, who has sought removal of the road blockade saying that earlier it took 20 minutes to reach Delhi and now it is taking over two hours and that people of the area are facing hardships due to protests at the UP Gate on Delhi border.On August 23, the top court had also said that the Union government and Delhi’s neighbouring states should find a solution to road blockades on the national capital’s borders due to farmers’ protests.